Back in 2006, user experience researcher Jakob Nielson published a study suggesting that users generally read web content — including the Search Engine Results Page (SERP) on Google and Bing — in an F-shaped pattern. His eye-tracking studies revealed that users first read content in two horizontal movements, and then read in a single vertical movement, thus the “F-shape.” Those findings have been the generally accepted standard for 10 years, but a new study by ConversionXL posits that there’s more to consider years after the introduction of the F pattern. 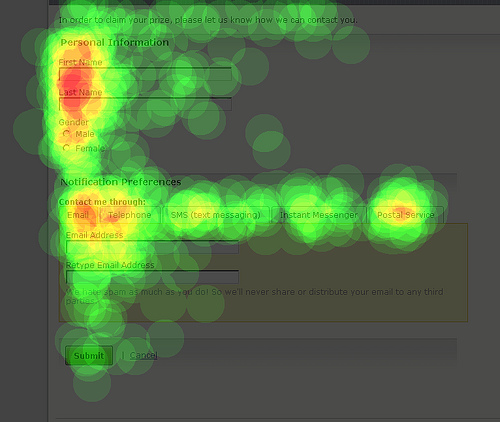 Before, users generally paid the most attention to the first two or three search results. Now, according to the new eye-tracking study, they’re instead exploring the top of the page more, primarily due to the SERP’s rich text snippets, ad placement, images and other content that appears at the top of the page. That explains the top-heavy heatmap from ConversionXL’s study. But that’s not the entire picture.

Despite the new findings, users still read top-to-bottom, left-to-right. They just may not be doing it in quite the same “F-shaped” pattern as they were before. According to the study, Google users tend to explore the entirety of the page and often explore both the rich data and those results that appear below the fold. That further signifies the importance of getting your content ranked at the top of the organic search results. Users certainly observed — and even clicked on — the top-of-the-page ads, but often quickly abandoned them when they realized that they were ads.

The study also suggests that ads on the right side of the page don’t get much attention, which probably explains in part why Google recently announced that it would stop displaying right-side ads. This study also revealed some major differences in the way the users observe Google’s SERP versus Bing’s. One of the most interesting tidbits from this portion of the study is that Bing users took longer — 10.5 seconds compared to a Google user’s 7.1 seconds — to explore ads appearing below the fold.

The Philosophy of Hacking Growth to Overcome Growth Stalls