For years, Google has made it clear that having at least three Expanded Text Ads in each of your ad groups was an established best practice for AdWords. Multiple variations meant that shoppers looking for relevant products had a chance to cycle through alternate-but-relevant messaging versions, and campaign managers would get access to statistical data on which ad resonated most with shoppers.  Now, as Google gets serious about its increasingly intelligent automations, it has started rolling out a way to turn all three of those Expanded Text Ads into just a single listing: Responsive Search Ads (RSAs).

A (Brief) History of the RSA

Not only will these ads have more potential variations in terms of messaging, but Google has also incentivized usage of this new beta feature by giving campaigns that integrate it more total real estate in the SERP. RSAs can have three headlines (90 characters) and two 90-character descriptions (up from 80 characters in Expanded Text Ads) displaying at once. 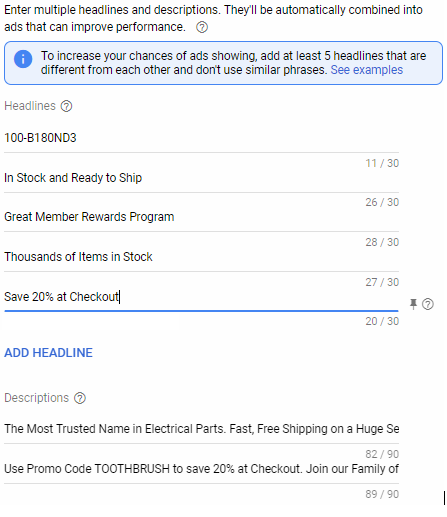 Setting up an RSA in AdWords

If your account has been set up for RSAs, you’ll see the option to create Responsive Search Ads from the Ad Creation dropdown, alongside the standard formats. RSAs can only be created within the new AdWords interface, but advertisers who have been dragging their feet to adopt the new interface can also create these ads within the most recently updated versions of AdWords editor. During the beta, it appears that RSAs will only be available in Ad Groups that have another ad format already running — presumably to ensure that your ads won’t stop running in case of errors.

When setting up RSAs, you may have some ads where you want to ensure that a certain headline displays only in a single position, like making sure that a headline displaying the product name is always appearing in the first position. You can accomplish this via Pinning: an option available on each individual headline or description to ensure that it only appears in one of the positions. Clicking on the Thumbtack icon on the headline will bring up the pinning menu:

Use the Pinning feature, shown here, to ensure that your ads only display in your preferred position(s)

Beyond these specific changes, ad creation for RSAs should still follow regular AdWords best practices. Keep messaging clear and concise, include the relevant keywords in the ad text, and make sure to feature clear calls-to-action.

Beyond the potential benefits of increased space for messaging, RSAs have a number of advantages over our previous generation of static ads (although, they also have a few disadvantages). Here’s our analysis of the pros and cons:

What to Make of it All

RSAs are a clear upgrade in terms of advertising real estate, and slot nicely with Google’s drive for increased automation on the platform over the last couple of months. Advertisers would be wise to start experimenting with the new format, not only to get a leg up on competition but also to learn what strategies will work best for your copy when Google has more control over how messaging is displayed.