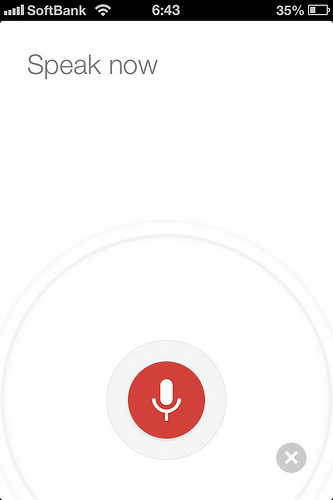 What will they think of next? During SMX West on March 1, Google Zurich Principal Engineer Behshad Behzadi announced that Google is working on a new “conversational search tool” that will let Google users search for, buy and locate specific products using their voice and mobile device. Much like Apple’s Siri or Amazon’s Echo, this leap plays into some of the most talked-about (and talked to) tech trends of the past several years. It’s especially pertinent to Google’s ongoing move toward all things mobile.

It’s not yet known what Google’s new voice search feature will be called or when it will be rolled out, but Behzadi did reveal that Google is investing more and more into talk-search technology. The technology will reportedly allow users to search for specific products and then receive a list of retailers that carry the product. It will then allow users to purchase products using voice. Behzadi said it will use conversational, natural language queries that are interpreted based on longtail keywords rather than a mobile type user’s standard shortened queries.

This means that Google’s goal is to respond to longer form voice search queries with the same accuracy as shortened strings. Instead of focusing on product-specific searches, the new voice search tool will allow you to find products by prompting Google with phrases like, “Where can I buy a new Surface Pro?” rather than “Surface Pro” or “buy Surface Pro.” It will be interesting to see how this new feature changes the SEO game. Behzadi honed in on the importance of adapting to new search tools and said that mobile search assistants will help users simplify their daily lives and better focus on the things that matter.

Behzadi also played a clip from the movie “Her” during his keynote speech, which was titled “The Future of Search,” and gave a detailed presentation covering the evolution of search technologies at Google.